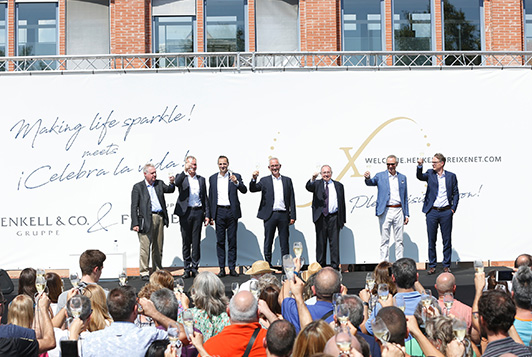 The new organism consolidates the Spanish-German coopera-tion and marks the beginning of the new phase of the world’s leading sparkling wine group.

Freixenet and Henkell have announced this morning in Caves Elyssia de Freixenet in Sant Cugat Sesgarrigues the appointment of Thomas Scholl, as the new Chief Financial Officer of the company, CFO, and Bernd Halbach, as the responsible for marketing and sales, CSMO. Thomas Scholl joins Freixenet provident of Dr. Oetker after he has worked for more than 20 years in the area of financial management and strategic cooperation. For his part, Bernd Halbach has held his professional career at Freixenet since 1984 as director of the international area.

Both directors become part of the new executive committee of the company led by Pedro Ferrer and Dr. Andreas Brokemper, as CEOs. This committee also includes Frank van Fürden and Eberhard Benz, responsible of the sales and production areas of Henkell, respectively.

With this new management structure, the Spanish-German cooperation that has created the world leader in the sparkling wine sector is reinforced. This alliance allows to establish synergies and to develop new markets as well as distribution channels.

The Henkell & Co. Group is part of the Oetker Group and consists of subsidiaries in 22 countries, exporting to more than 100 countries around the globe. It is the market leader for wine, sparkling wine, Prosecco or various categories of spirits in numerous countries. Its portfolio includes well known international brands such as Henkell and Mionetto.

Further information can be found at www.henkell-gruppe.com.

Freixenet S.A. is a family-owned company which was founded in 1914, but has roots that date back to 1861. It is Spain’s largest exporter of beverages and the global No.1 cava producer. The company is headquartered in Sant Sadurní d’Anoia, close to Barcelona. Freixenet, which owns brands such as Freixenet, Mederaño, Mia, Segura Viudas and Gloria Ferrer, has subsidiaries in 19 countries, such as in the US, Argentina and Australia and exports its brands to 109 countries.